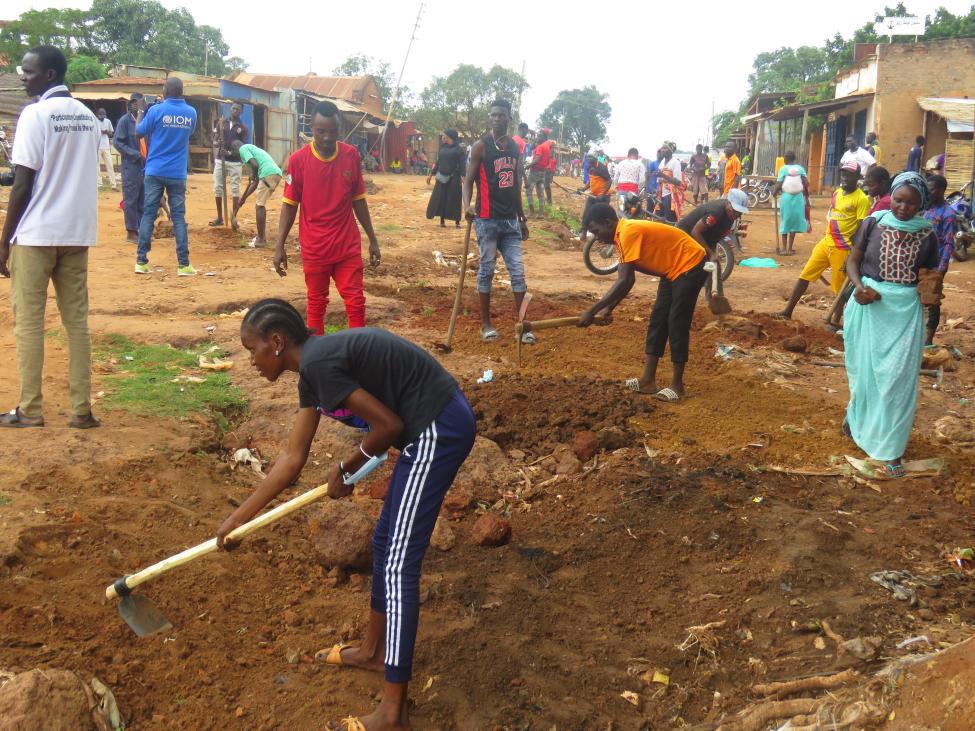 The International Organization for Migration (IOM) and Community Empowerment for Progress Organization (CEPO)— a civil society organization on Tuesday launched cash for work program in Wau town, targeting the youth.

At least 300 youth from five blocks of Wau Municipal Council will be involved in the program aimed at encouraging the so-called gangsters to abandon their violent gang groups and become productive young people within the community.

Activities for the youth cash for work program includes clearing road potholes within Wau town which are impeding movements, and general cleaning in the markets.

Addressing the youth during the launch, Stephen Robo the state coordinator for CEPO urged the youth to denounce violence and instead work for the development of their communities.

“What I want from you is to show the community your strength and commitment and that you should not be known for violence,” Robo said. “Demonstrate your responsibility because the nation needs your energy.”

Some of the youth who have denounced their past gang lives said they chose to be part of the cash for work program for the community to recognize that they are now productive people.

Eton Daniel Dominic said they have also chosen to work on the road from the auction to Mark’s Bridge because of it devastating condition.

"We have chosen the road from Auction to Mark’s Bridge because it is big and its condition is not good, people are not accessing it comfortably and this is why we decided to work on it,” said Dominic.

“Nobody thought of it but we the youth have decided to work here and do clearing of potholes with stones and dredge of water channels so that vehicles should easily have free passage,” he added.

Momica Paul, another youth member said some of the so-called gangsters were still in their gang groups because they have not been empowered to work for themselves.

“Let me tell the Municipality that we are known by our group affiliations but I want to say we are not for violence, we can help and do developments activities like the work that we are doing now is for our nation,” she said.

On her part, Wau town Deputy Mayor for Lands and Infrastructure, Roweda Rajab Suleiman, welcomes the initiative, commending IOM and CEPO for turning the gangsters into a productive force.

“The CEPO organization and IOM have managed to translate to the public that the nigas (gang groups) which were not needed in the community have become productive,” said Roweda.

She pledged to support the ongoing rehabilitation work by providing food and other materials needed for the work.

The cash for work program is supported by the UN Secretary General’s Peace Building Fund, under the project Youth Action for Reduced Violence and Enhanced Social Cohesion in Wau, South Sudan, implemented jointly by IOM’s Transition and Recovery Unit and the United Nations Educational, Scientific and Cultural Organization (UNESCO).

This story was written by James Deng Dimo.