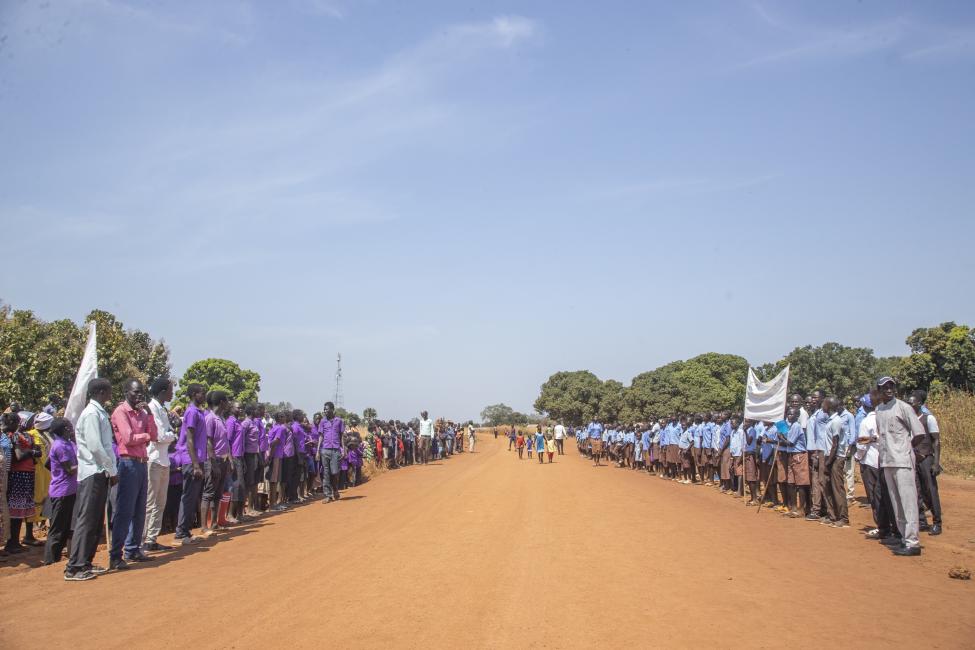 The 48 kilometers road, dubbed “Salama Road” by the local communities, was rehabilitated as part of the Mitigating Cattle-Related Violence in the Border Areas of Western Bahr el Ghazal and Warrap States project funded by the United Nations Multi-Partner Trust Fund on Reconciliation, Stabilization and Resilience (South Sudan RSRTF), jointly implemented by the International Organization for Migration (IOM), the UN Mission in South Sudan (UNMISS), and the Food and Agriculture Organization (FAO).

The road is expected to enhance security and promote social cohesion between the primarily farming and the primarily livestock-keeping communities from WBeG and Warrap states, respectively.

Speaking at the ceremony also attended by Hon. Pia Philip Yangu, the Undersecretary in the Ministry of Peacebuilding, ministers and other senior government officials, UN heads of offices and local chiefs, IOM’s Head of Sub-Office in Wau (on behalf of the IOM Chief of Mission), Riad Marrow, said that IOM was committed to support communities work together to build peace and promote social cohesion.

“IOM is very pleased to have been given the opportunity to support the communities from Western Bahr el Ghazal and Warrap States to come together to rehabilitate this link road which will contribute towards the social economic development of the two states as well as increase the safe movement between the two states,” said Marrow.

The road compliments other peacebuilding and conflict prevention interventions already and currently being undertaken to support reduction of violent conflicts and contribute to a peaceful and safer cattle migration season between farmers and cattle-keepers in the border areas of the two states.

The cattle migration season has previously been prone to subnational conflict between the crop farming Kuajiena and the pastoralist Pagol communities competing for scarce water and grazing resources. However, this year, local leaders of the two communities, through the joint implementing peacebuilding partners and local authorities, successfully managed a violence-free cattle migration season. A peace celebration was held to mark this momentous achievement.

During the Peace Celebration, the two communities expressed their appreciation to the support provided by IOM as well as the need for more support to enable them to recover their socio-economic interlinkages severed by years of enmity and violence, and the link road was identified as a priority towards this end.

“It is very commendable that the two communities of Pagol and Kuajiena have come together to build peace between themselves and the commitment they showed to working together to rehabilitate the link road which is a demonstration that they are capable of existing as one people of South Sudan,” said Honourable Pia Philip Yangu.

The project aims to help mitigate cattle-related violence in the border areas of Western Bahr el Ghazal and Warrap States, particularly in Jur River and Wau Counties of Western Bahr el Ghazal and Gogrial West, Tonj North and Tonj South Counties of Warrap State. The project was initiated to complement and support efforts by local authorities and peace actors to address the perennial violent conflicts between cattle-keepers and farmers witnessed along the border areas of two states in previous years.  The peace efforts by local authorities, peace actors and local communities resulted in the signing of the  Marial Bai Agreement and its subsequent revisions.