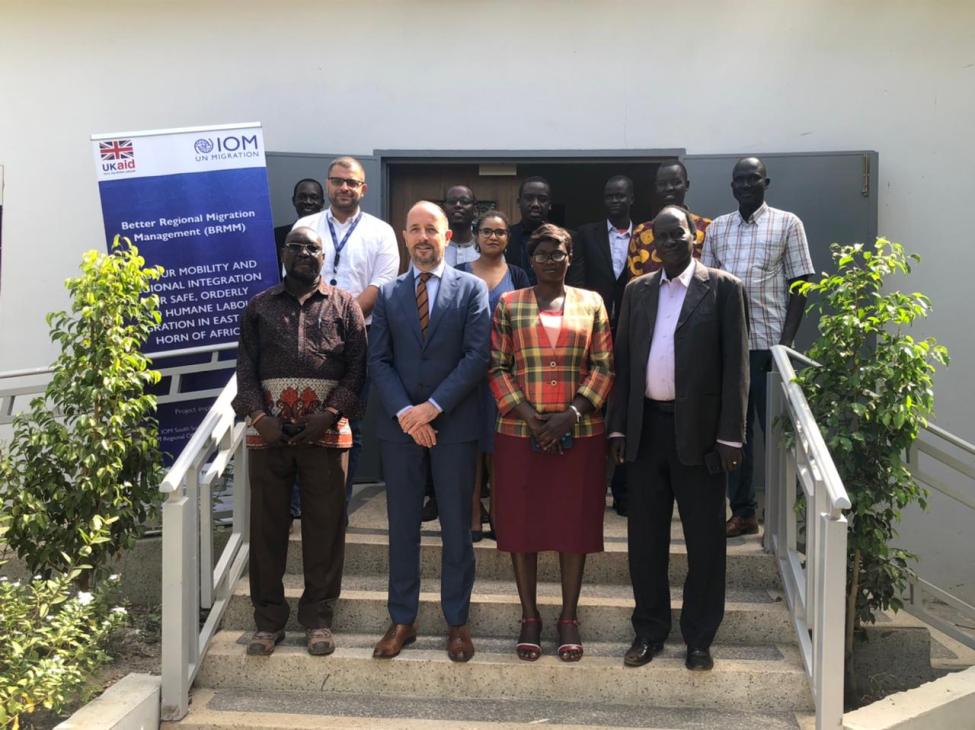 Juba, South Sudan - The Government of South Sudan with the support from IOM – UN Migration Agency have launched the piloting of Labor Market Information System (LMIS), a virtual tool that allows the production, storage, dissemination, and use of information on the Labour market. The system will also contribute to the knowledge of labour migration indicators in the country, as well as the formulation of evidence-based policies and strategies.
During the launch, representatives of the government, IOM, and other key stakeholders learnt first-hand about the LMIS, the need to have labour market information and statistics in a systematized and accessible manner and the role of LMIS systems to governments decision making. Participants also discussed the challenges for obtaining practical information on labour markets to match supply and demand in an efficient and effective manner.

The piloting of the system in South Sudan, is a response to an assessment performed under the Better Regional Migration Management (BRMM) program, funded by Foreign Commonwealth Development Office that showed the government’s interest and readiness, to address the labour market supply and demand needs on youth employment and job creation in the public and private sectors. The government also indicated the need to have LMIS to address the protection concerns of migrant workers’ mobility, foreigners living and working in South Sudan, South Sudanese living and working abroad as well as returning migrant workers.

In 2020, South Sudan was believed to be hosting some 882,000 migrants, the majority coming from the East and Horn of Africa, according to the United Nations International Migration Report. In 2020 49.7 percent of immigrants were female, 34.4 percent were under the age of 20, and 3.4 percent were aged 65 and older. The majority of international migrants in South Sudan are thought to be from the East and Horn of Africa, but because of their often-irregular immigration status, little is known of the accurate numbers.

The management of labour migration processes in developing countries is hampered by the lack of timely, objective, and reliable data on labour migration flows. Migration policies and informed decision‐making require reliable, timely and comparable data. The increasing number of bilateral labour agreements also generates new demands and needs for data. Furthermore, labour migration data migration management is hampered by manual, unstandardized data practices and infrequent data collection. Through the BRMM and other projects, IOM is stepping up efforts in the region to collect, maintain and share data relevant to managing labour migration.

The Republic of South Sudan (ROSS)has a population of approximately 11.19 million people. The young nation has developed into a significant producer of migrants from the region as well as refugees and returnees.  While the country is still developing and revising its institutional framework, it already has a set of laws and policies in place that influence the governance of migration and related issues on a direct and indirect basis. Among them are the Nationality Act 2003, The Child Act 2008, Passports and Immigration Act 2011, The Refugee Act 2012, The Labour Act 2017, and the National Comprehensive Migration Policy 2019 which seeks to improve, and establish, a system of policies and institutions to manage migration.
“The Government of South Sudan welcomes the launching of Labor Market Information System as these fit into our National Development Strategy whereby the government seeks to drive socio economic development through evidence-based policies. The LMIS is a one stop virtual venue where governments can generate information on labor supply and demand. This will resolve the information gap we currently have. Government of South Sudan thanks FCDO and IOM for the technical support, materials, and capacity building. Said Adwok Chol Awur Dhonyal, Acting Director General of Policy Planning and Statistics, Ministry of Labour.
IOM will provide support, capacity-building and technical assistance for the Ministry of Labour as they install and implement the system. The installation of the LMIS by IOM is guided by the Global Compact for Migration (GCM), which speaks of collecting and using accurate and disaggregated data as a basis for the creation of public policies as its first objective. The progress and achievements of the piloting of the LMIS in South Sudan will be documented and shared through the Regional Ministerial Forum on Migration to complement the efforts of the MS LMIS. The LMIS piloting in South Sudan will be implemented in synergy with the IOM Development Fund (IDF) project undergoing in Kenya, Somalia and Uganda to enhance the Capacities on Labour Migration Data Collection, Analysis, and Sharing to Support Labour Migration Governance in the East and Hon of Africa.

This initiative is under the Better Regional Migration Program funded by the Foreign, Commonwealth and Development Office (FCDO) and implemented by IOM South Sudan in collaboration with IOM Regional Office for East and Horn of Africa.